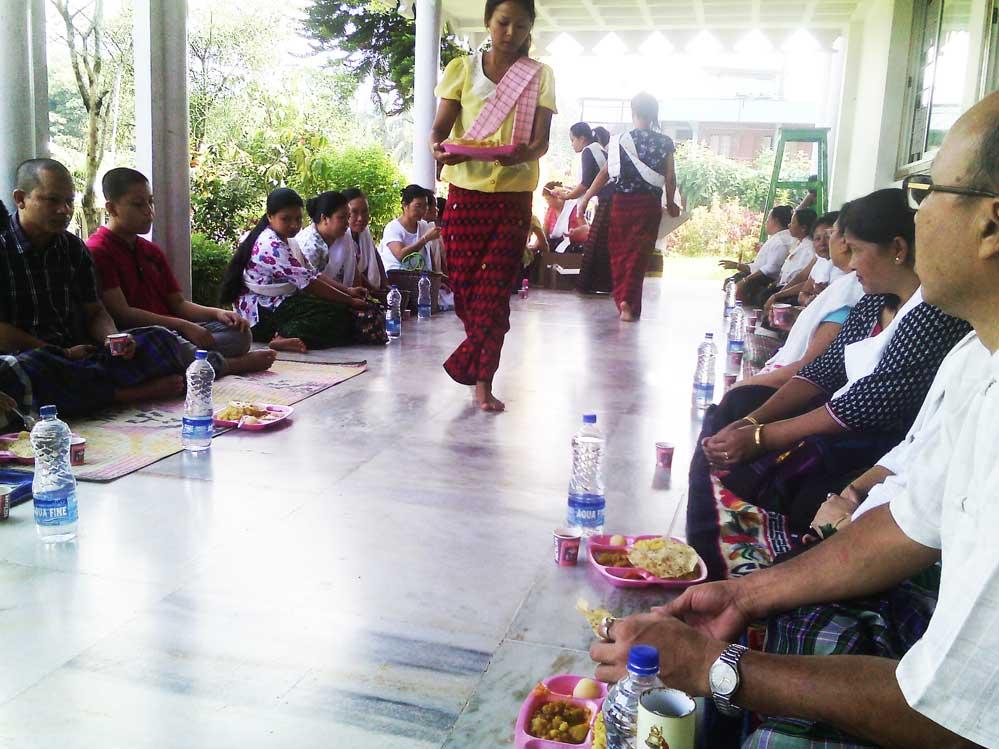 The Theravada Buddhist across state celebrated Sitang Chale popularly known as Madhu Purnima o with great pomp and gaiety on Monday. The Honey-offering Festival is a Theravada Buddhist religious ceremony that commemorates the service and sustenance provided by animals to the Buddha during his 10th rains retreat at Parileyya Forest.

According to legend, during his retreat a monkey brought a honeycomb for the Buddha to eat, while an elephant brought fruit and protected the Buddha from fierce animals. When the Buddha accepted the gift of the honeycomb, the monkey, overjoyed, began to leap from tree to tree, but suffered a deadly fall in his reckless jubilation. Because of his generous gift, however, the monkey was immediately reborn in the Heaven of the Thirty-Three (Pali: Tavatimsa), the second of the six heavens in the Desire Realm.

Since these events are believed to have taken place on the day of the full moon, the occasion has come to be commemorated as Madhu Purnima, or “honey full moon.” The festival is observed on the full moon of the 10th lunar month, mostly by Theravada Buddhists of Namsai and Changlang districts.

The Theravada Buddhist residing in capital complex observed the day with full devotion and enthusiasm. The lay practitioners pledged to observe the five precepts—to refrain from taking life, stealing, sexual activity, lying, and intoxicants—and many also vowed to observe the eight precepts during the ceremony.

The ceremony was also marked by a long period of chanting, paying homage to the Buddha, the Dhamma, and the Sangha, followed by offerings of food, flowers, incense, lamps and listening to the Dhamma talk from Scholar Kesang Aryadhamma. The lay devotees also shared the accumulated merit with friends, relatives, and all sentient beings.

5 Nov 2016 - 3:11pm | AT News
Senior minister Dr Himanta Biswa Sarma blamed it all on the country’s internal disparity for allowing the north eastern region to linger in the back stage of progress. In his speech at a three day...

1 May 2017 - 9:36am | AT News
The Dispur police have freed Anjan Bora after questioning in connection with his recent Facebook status claiming that a BJP lady legislator makes money by indulging in flash trade triggering anger...