The move to give shelter to non Muslim refugees from Bangladesh and Pakistan draws sharp reactions across the state with the various organisations criticizing the centre these days. The Hindu Yuva Chhatra Parishad asked the Centre to start the settlement in Gujarat at the earliest.

Addressing a press conference in Golaghat on Monday, the organization president Bolen Baishya that the decision will leave 2 lack bighas of agricultural land vacant in Bangladesh. On the other hand, the land deal has already made Bangladesh richer. He said it will be a threat for Assam which they won’t allow it to happen. 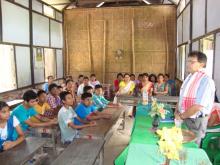 2 Jul 2012 - 11:22pm | Dibya J Borthakur
State Bank of India, has identified education is one of the thrust areas for the Bank under its Community Service Banking ( CSB ). Many of the Schools still lack basic infrastructures. In order to...