Call off strike: Guv to teachers

Nagaland governor PB Acharya appealed to the Rashtriya Madhyamik Siksha Abhijan (RMSA) agitating teachers to withdraw their strike for the benefits of the students.

He said the strike greatly affects less fortunate and weaker section of the society and it also deny the right to education to the children of the schools.

Acharya further directed the government to address the grievances of the teachers expeditiously by releasing their pending salaries so that they can perform their duties without further delay.

The aggrieved teachers, under the umbrella of Nagaland RMSA Teachers’ Association 2013 (NRMSA 2013), launched their agitation from August 21 last by boycotting classes in their respective schools.

20 Jan 2012 - 3:19pm | editor
The 20th biennial conference of All Sonowal-Kochari Students Union will start from Friday january 20 at Margherita. All the preparations are completed for the conference, which will be held at North... 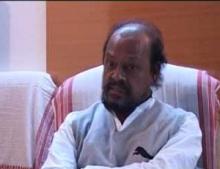 20 Jan 2017 - 3:21pm | AT News
In a major embarrassment for Congress in Assam, police have grilled former Assam welfare minister Akon Bora on Friday in connection with a multi crore scam.A team of anti corruption cell questioned...