Yet another political party is coming up to beat Congress and BJP 6 months before the assembly polls. Named as the Asom Khilanjiya Manch, the party on Monday disclosed its poll blueprint with 30 candidates.
They strongly criticized Congress, BJP and AIUDF alleging that these parties have been failing to deliver the goods and that the election is the best way to thrash them. 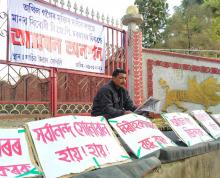