Properties worth one crore were reduced to ashes when at least ten shops caught fire in Goalpara district on Saturday.

The incident took place at Balapara area where the fire originated at a shop and then started spreading to the adjacent shops. Fire tenders were deployed to deal with the huge inferno. But by then the fire engulfed as many as ten nearby shops.

“The extent of damage stands nearly over one crore. The reason of the fire has yet to be ascertained. Preliminary investigation suggest electric short circuit. Details are yet to be learnt,” said a police officer who arrived in the spot to assess the situation.

31 Dec 2011 - 3:36am | editor
Assam Chief Minister Tarun Gogoi on Friday accused KMSS and other anti big dam organizations of trying to foment trouble in the state. Addressing a function in Jorhat, Gogoi said those agitating... 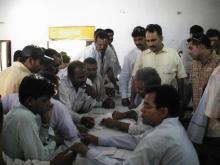 Finally, the gram pradhans respect the rights of the people