Brahma while talking exclusively to Assam Times today told that district police administration lifted the PSO from him on September 9 without giving any knowledge to him and till this morning he is living without security in his life.

'I don't know any knowledge about lifting of PSO from him, police officials had not given any reason about lifted matter so far', Brahma said.

He has intimated to Assam DGP Khagen Sarma about lifting of PSO yesterday through emails, besides contact to SP Kokrajhar Shyamal Prasad Saikia into matter and Saikia assured to look into matter by Monday next.

Brahma said that police administration has a vast information about me that I was attacked by militant outfits in 2009 and safe luckily, but lifted of PSO from him was a serious concern for him in today's life.

BJP leader expressed his serious concern over the PSO lifted incident in his life and demanded early redeployment of PSO to meet safe and security.

Reoreoa Narzihary,ex BTC executive member said that his PSO was lifted yesterday without any intimated to him.He has demnaded early reinsted of PSO for security ground.

Chrisostam Tudu(Congress) also expressed his resented over PSO lifting from him yesterday.He told that it is unwanted matter for a ex BTC member and VIP that of lifting security officer attached to him without any information. 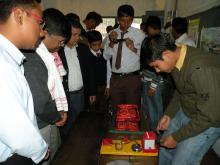 Kids Film Festival in the city

17 Nov 2015 - 7:55pm | AT News
The NPS International Kids Film Festival is scheduled to kick off on November 24 with the participation of children from Italy, Sweden, Russia, Brazil, South Africa and the host country India....

10 Nov 2012 - 4:53am | editor
The Planning Commission has cleared a huge Rs 14.49 crore flood control scheme for Kamrup Rural district. The project will involve the dyke of the river Brahmaputra river from Gumi to Kalatoli. The...