The All Tribal Students’ Union, Manipur will mount more pressure on all tribal MLAs to quite early. In a set of resolutions on Monday, ATSUM demands immediate restoration of internet connectivity and SMS facilities.

The student organization has charged the government with allowing to prevail a dictatorial regime denying them our rightful entitlements as citizens. They have endorsed the initiatives of the Joint Action Committee in Churachanpur to expresses solidarity for future actions.

They further demand safe passage of all people from Manipur outside the north eastern region. The resolutions were adopted at a meeting in Imphal on Monday. 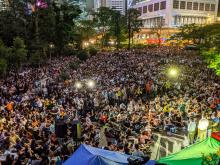 The Roots of Hong Kong’s Crisis

1 Oct 2019 - 8:27am | Henry Huang
Hong Kong, the pearl of the East, yet lives in such a turmoil.  The ongoing political crisis and massive protest have drawn a large amount of international concern and attention.  There are...