The Sonapur gangrape accused confessed to have committed the crime after police caught them on Friday night. During police interrogation, one of the duo said that the victim was his classmate and that he and his friend took her on their car to be gangraped at Byrnihat in Meghalaya.

They warned her of dire consequences if she disclosed their names and dumped her in Ural villages along the Assam-Meghalaya border early in the morning. After confirmation, police arrested the accused on Saturday.

6 Jun 2008 - 6:11pm | editor
Former Rajasthan Chief Minister and Congress veteran Shivsaran Mathur has been appointed as new Assam Governor following an end to the term of Lt General (Retd) Ajoy Kumar Singh. The decision to this... 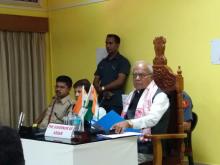