A hardcore cadre of the NDFB-S was killed in an encounter with security forces at Kalasi Samokha area under Kokrajhar police station wee hours in Kokrajhar district.

Security forces belonging to Army, Police and CRPF cobra battalion raided the area and fire of exchange was held where the militant outfit cadre was killed.

The slain cadre was identified as Bhaigo Boro@ B Bilaigra, hailed from Paneri of Udalguri District.

The cadre was involved with attack of handi speaking and killing of Adivasi at Pskriguri last year in Kokrajhar district.

One AK 56 ruffle, 32 live ammunition, 2 grenades, 18 empty cartridges and hand bag was recovered from his possession.

The cadre was hardcore of the militant outfit and was involved with many anti national activities, a senior police officer said. 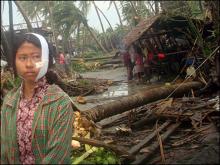 15 Jul 2008 - 12:47pm | Nava Thakuria
The devastating tropical cyclone Nargis that struck southern Burma (Myanmar) two months ago, has revealed to the world that it was even less disastrous compared to its regime. The military regime,...