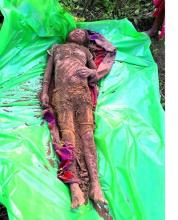 1 May 2017 - 1:03pm | AT Staff Reporter
The northern parts of Udalguri district bordering Bhutan have been badly hit by social menaces like witch hunting,child marriage, illegal trafficking of woman and girls etc for years.Taking...

24 Sep 2012 - 2:59am | editor
In yet another tragic incident, the children met watery grave and five persons went missing after a boat manned by National Disaster Response Force personnel on a rescue mission to help flood-...