Two back to back incidents of racial attacks on north eastern people in New Delhi hangs the capital’s head in shame again.

The first incident took place on Friday when girl moved police alleging sexual exploitation by her employer.
The manager of the firm where the victim is an employee is absconding. Search is on to nab the accused.

The second incident took place at Malviya nagar where a local youth molested a Naga girl on Friday. Police, however, caught the accused on receipt of the complaint.
…… 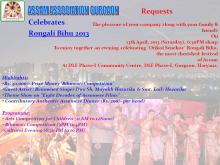