19 May 2008 - 2:19pm | editor
One ULFA’s self style corporal Uttam Neog was killed in an encounter with Army on late Sunday night in upper Assam’s Kakopathar in Tinsukia district. According to information, he had an... 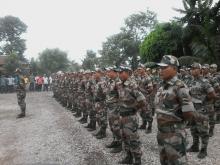 14 Sep 2016 - 6:34pm | AT Kokrajhar Bureau
The National Democratic Front of Boroland (NDFB) observes its 28th national Martyrs Day at different places today to mark sacrifices of cadres of the militant outfit organization for the cause of...