A CRPF jawan gunned down one of his colleagues when they were deployed to deal with a people in Nalbari on Friday who blocked a vital road demanding Tihu as dib division.

The incident took place when hundreds of local people in Nathkuchi blocked the road raising their demands forcing the authorities to deploy security forces.

Suddenly one of the jawans Amal Das started indiscriminate firing at his colleague Nirmal Das who succumbed to injuries on the way to the hospital. Then Amal tried to shoot himself dead to be prevented by other colleagues.

Several other protestors also sustained injury in the incident. Eight of the seriously injured protestors are undergoing treatment at the hospital. 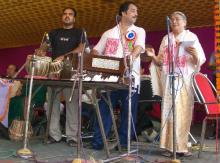 21 Jun 2009 - 1:20am | Jayanta Kumar Das
Asom Xahitya Xabha has celebrated Rabha Divas, centrally at Kalaigaon in Udalguri district on June 19 and 20 with gaiety. Sabha in association with ‘Kendukalai Sahitya Samaj’,Kalaigaon...

28 Jan 2014 - 10:22am | AT News
A lady ULFA leader is believed to have died under mysterious circumstances in Myanmar camp. She was none other than Anju Saikia alias Dalimi Dutta who hailed from Gaurisagar in Sivasagar district.But...