26 Jul 2012 - 7:45pm | editor
Prime Minister Dr Manmohan Singh is scheduled to visit Kokrajhar on Saturday in the time of ethnic clash that has so far left 42 people killed. Dr Singh, who happens to be a Rajya Sabha member from... 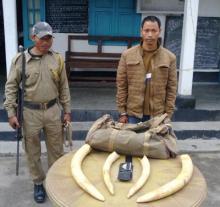 4 Apr 2017 - 10:57pm | AT Kokrajhar Bureau
Security forces apprehended an Ivory smuggler along with Ivories from Sudempuri area under Kachugaon PS in Kokrajhar district on Monday evening.According to police, based on an input about movement...

12 May 2014 - 8:37pm | AT News
No major setback awaits Congress in the Lok Sabha polls if the exit polls are any indication.CSDS-sponsored exit poll has projected 40% vote share for the ruling party 1% up from 2009 Lok sabha polls...