The Delhi A'chik Youth Association (DAYA) has extended warm welcome to all those who have cleared the Civil Services Examination 2007.

In a statement received here from F.Silkam Sangma, General Secretary DAYA specifically has cited Davis Nestell Rangsa Marak who has emerged successful being roll number 011565. He is the first Garo to clear the Civil Services Examniation after a gap of over 30 years.

DAYA says it is, indeed a matter of pride to the noble Garo Community that once again the youths are proving their mettle in the National Competition. The Asociation further has exhorted the Garo Youth to take the example set by D.N.R.Marak and work with conviction, intelligence and passion to excel in their chosen fields so that they may shine and with them the good name of the Garos. 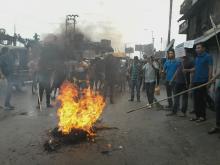 31 Aug 2017 - 3:55pm | AT News
Yet another incident of gangrape sends no less shock and anger across the state on Thursday. The victim is battling to survive at the Gauhati Medical College Hospital.  The incident took...