Rotary International District 3240 ig going to organize “Light Up North East”, a national conclave for the promotion and focus of the media on the Northeastern region in Guwahati on June 6. Designed as an exclusive programme to promote the Northeast states through the media in a positive note, the one-day event aims to bring together a galaxy of eminent media personalities from across the country as well as the Northeastern region.  The objectives of the initiative is to draw up a strategy to overcome the various prevailing negative aspects most of it perceived due to the lack of adequate knowledge and interest that people outside the region have about the region and its people.

The conclave intends to examine the focus of the media and the space that the region receives in the media, which in turn tends to generate certain negative perceptions. Most times it turns out that people across the country are somehow not convinced that the problems of the region are due to disturbances caused by some social imbalances, and that many of these have now been largely overcome and the situation is much better today.

The conclave will felicitate film-maker Jahnu Barua, social worker Temsula Imsong and journalist Tongam Rina for their works. Barua will make a brief presentation for the need of a Separate Time Zone for the Northeastern region. 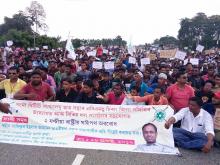 26 Aug 2017 - 5:52pm | AT Kokrajhar Bureau
ABMSU along with several other organisations blocked the National Highway in several places in lower Assam districts on Saturday demanding Justice to Lafikul Islam Ahmed who was killed by...