A total of 96 students passed out of 97 appeared in the examination, of which 76 stood in first division and 20 in second division.

Twenty students got star marks, 11 recorded distinction, besides 175 letter marks from the school.

Arkojyoti Majumdar stepped to get highest marks securing 558,Angana Choudhury secured 553 out of 600 along with cent percent marks secued in Mathematics from the school.

In UN Academy, 117 students passed out of 119 appeared students of which 80 stood in first, 36 in second and one in third division, besides 15 got star marks and three distinction marks.

Krishna Gopal Basumatary,Directr the of the Academy congratulated successful students who come out in the final examinations.

Anup Majumdar, head master of the Babyland school also congratualated students told that the school has scripted 99 percentage in the results declared today scoring huge attractive marks in the school. He said that students faces hardships in the region as several organisation and parties called bandh and strike for their demand and issues.

He has urged the govt to create congenial atmosphere so that healthy situation prevails inctge region.

Majumdar said that the school management is trying to meet stand and cent percent results in the school among state. 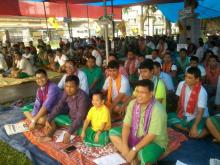 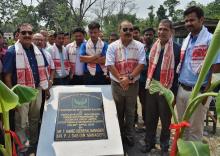