RMC to move to SC against govt’s double standard

The Religious Minority Council(RMC),BTC region flayed on BJP led NDA government at the centre and warns to move to Supreme Court as government has been playing double standard role while identifying citizenship on communal manner to give status of Indian citizenship to Hindu refugees from Bangladesh.

The newly formed Kokrajhar district committee of RMC took oath and responsibility of the council at a meeting held at Bhotgaon ME Madrasa ground with Gulzar Mallah,in the chair today in Kokrajhar.

In an exclusive interview with ‘DY 365’ on the sideline of the meeting, Aynal Haque,leader of BTC RMC has strongly reacted to the NDA government which is setting to move forward on the question of granting citizenship to Hindu immigrants from Bangladesh said that government has been stepping anti-Muslim spirits in the country taking exclusive attitude on Hindu refugees to India.

He has opposed the step being initiated from government said that the NRC updation in Assam should held be free and fair under the guidelines from Supreme Court on the based year of 1971 and identify the citizens in healthy manner.He said that the NRC updation should be through of Assam Accord spirits and there should not be given Indian citizens either he Bangladeshi Hindu or Muslims who are coming from Bangladesh after 1971 in India.

He has accused of that BJP party has been stepping to bring party interest by promising citizenship to Hindu Bangladeshi in India which was not acceptance for the country.

He has also termed BJP as communal party for their anti-community activity for political interest.

He has demanded early stop of stepping to grant citizenship to Hindu Bangladeshi in India. 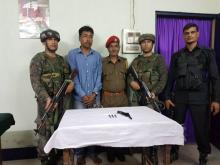 24 Apr 2014 - 7:14am | AT News
Brisk polling is what undergoing in Barpeta constituency along with five others in the last and third phase of General elections on Thursday.Heavy turn out of voters is expected in this crucial...

6 May 2017 - 8:47pm | AT Kokrajhar Bureau
Two poachers were apprehended by police and army at Turibari village near Manash National Park in Baksa district on Saturday. They were identified as Arjun Boro and Gangar Basumatary. Two country...