A hardcore cadre to the NDFB-S was killed in an encounter with security forces at Ultapani area under Kokrajhar PS late last night in Kokrajhar district along the Indo Bhutan border.

Getting a tip top information about the presence of militant outfits inctge area ma joint team of security forces from police, army and SSB conducted operation and encounter was held in between NDFB-S and forces where a hardcore cadre if the militant was killed on the spot.

The slain militant wax identified as Bhusa Brahma@Bhuhum, a cadre of 38th batch of the outfit.

A pistol, three rounds and three hand grenades were recovered from his possession.

17 Jan 2012 - 10:37pm | Anup Arandhara
As a gift of English new year and the eve of the Bhogali bihu, the Vice-Chairman of Assam planning Board, Ex. Minister and MLA of Sonari legislative assembly, Sarat Borkotoky presents many... 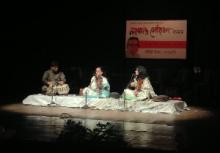 Opp walks out of KAAC session

25 Feb 2012 - 1:22pm | editor
Opposition members in the Karbi Anglong Autonomous Council on Friday walked out of the budget session alleging various anomalies in both plan and non planned financial statement. Backed by PAPAS...