Once again BJP’s somersault is on the display over the Indo-Bangladesh land swap deal. The party’s central leadership, virtually, accepted the deal hardly a week after the cabinet exempted Assam from its purview.

The party gave the green signal to the deal with Bangladesh citing stiff opposition from Congress when the central leadership hunkered down at Amit Shah’s residence in New Delhi on Monday evening.

Talking to reporters after the meeting, state unit president Siddarth Bhattacharya admitted that the bill is unlikely to be stopped if Congress refuses to bend.

“We don’t want this bill to be finalized for the greater interest of Assam. We don’t want Assam to surrender even an inch of land before Bangladesh. But we have seen that the Congress did it several years back and that’s why, if Congress does not support us the bill will hardly change,” said Bhattacharya.

MPs Ramen Deka, Kamakhya Prasad Tasa were among the leaders who attended the crucial 2 hour long meeting in the evening.

Notably, on May 1 the Union cabinet which took place under prime minister Narendra Modi dropped Assam from the controversial land swap deal to be opposed by Congress.

Then political observers called it yet another step to escape the heat of the land deal swap which the party accepted initially.

In his recent letter Chief minister Tarun Gogoi urged prime minister Narendra Modi to give a second thought alleging that it would do more harm than good. He said that the governnment would find it difficult to complete the border fencing if the deal is not allowed to implement.

DAYA for strategies to stop discrimination on NE people in Delhi

16 Jan 2008 - 9:45am | editor
A set of well planned strategies are all that is necessary to stop discrimination and sexual harressement on the north eastern people residing in New Delhi. This was more or less of what the speakers... 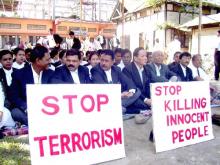