After days of hectic political confabulations, regionalism in Assam is back with a renewed strength and vigour. The entire development came up from 11 in the morning at the Ambari based AGP party headquarters. The main Opposition AGP’s unification committee on Monday hold a series of brainstorming sessions categorically with four of its breakaway groups to finalise the formalities for unification.

Coming out of the meeting the former Chief Minister told the waiting reporters outside that it’s a step in right direction to bailout the state from the Congress government's misrule. Mahanta was expelled from the party three years back for failing to turn up when he was charged with indulged in a number of anti-party activities. That too before the last Assembly polls.

This was followed by Trinamoo, Gana Parishad general secretary and former minister Atul Bora and his supporters who landed at the Ambari office after a gap of ten years. For the former minister his homecoming only needs formal announcement saying it’s the need of the hour.

Thereafter came Pabindra Deka who is running the Purbanchalya Loka Parishad followed by another PLP Rajkumar group who have been insisting on unification of regional parties.

Later the party will discuss the matter to take a formal decision to this effect. 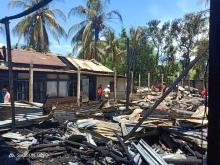 11 Nov 2012 - 5:32am | editor
Despite strict vigil, ULFA militants are moving with arms without any hindrance in Sivasagar district. Sonari police recovered a huge cache of explosives during a joint operation with army in Bahbari...