The world heritage site is likely to see the increase in the rhino population. A two days rhino census has begun on Thursday morning.

A team of experts from the Wildlife Institute of India, National Tiger Conservation Authority, ministry of environment and forests is overseeing the operation  concluding on Friday. 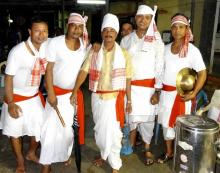 16 Apr 2013 - 9:36pm | Kishore Kalita
The Assam Association, Chennai celebrated its annual annual Rongali Bihu celebration on April 13 at CLRI Playground, with a cultural programme showcasing the rich tradition of the Assam. The Assamese...