4 Dec 2014 - 8:11pm | AT News
Good news for BPL families. Courtesy Dispur. The government is all set to introduce a total health care package for these families. Chief Minister Tarun Gogoi, who is behind the entire initiative has... 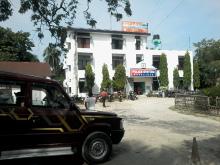 27 Oct 2015 - 5:39pm | Hantigiri Narzary
Even as police administration has been stepping to check anti social activities, bike-vehicle stealing situation in the district, a Mini truck 407 model was stoled from a parking place at Mokrapara...