As many as 37 candidates filed their nomination papers for 11 constituencies in Kokrajhar district under Kokrajhar and Gossaigaon sub-division today at Gossaiagon and DC office in Kokrajhar.

Mohilary said that his party is retaining in power with mass support as irrespective of caste and creed are supporting his party.

BJP leader Manoj Kumar Brahma has claimed that his saffron party is getting majority supports in the election and reigning of council is cent percent clear. 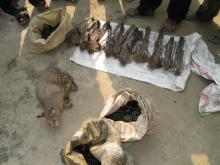 27 Aug 2010 - 4:03am | editor
Tension still grips Charaipung area when armed miscreants set on fire 3 more houses where a widow and pregnant woman along with her three children had a narrow escape. This string of fresh...