Although the election commission has yet to declare notification,the election fever grew up in all constituencies in BTC region that several party and organisations are gearing up to field candidates.

Several nominations declared from party and orgainsations including ruling BPF,Peoples Coordination for Democratic Rights(PCDR),BJP are campaigning for their supporting at their respective constituencies.

Maoti Brahma Hazoary,PCDR candidate from Sidli constituency in Chirang today inaugurated the Subaijhar,Bengtal primary office of PCDR,besides opening of Goibari sub-election steering committee and held public meettings at Sakati,Ranchaidham village. Hazoary told that irrespective of caste and communities are supporting him and his winning is cent percent clear in the ensuing council election. 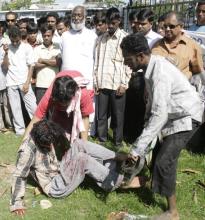 GMC proves to be a futile organization

1 Nov 2009 - 12:25pm | Daya Nath Singh
Lack of a marketing policy and ‘corrupt’ administration has led the Guwahati Municipal Corporation (GMC) to a high class ‘bankruptcy’. This has developed like an incurable...