The death of swine flu patient in Jorhat has forced the Assam government to intensify the measures to curb the killer disease in the state.

The authorities have asked the doctors to provide the best possible treatment to ten others who have been undergoing treatment.

Official sources told Assam Times that the state till date has ten people who have already tested positive.

The state registered the first one H1N1 death on Monday when a 59 year old man died in the wee hours at the Jorhat Medical College Hospital.

The government further has appealed to the people to remain alert these days. 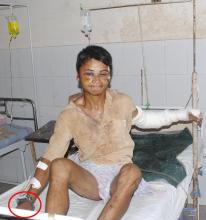 7 Mar 2016 - 9:44pm | Hantigiri Narzary
A flag-off ceremony of education study tour of border youth has been organised by 16th Bn SSB Ranighuli at thbattalion headquarter in Kokrajhar on Monday. A total of eight youtgs which comprises of...

Free IT empowerment in Kokrajhar

5 Jul 2014 - 6:39pm | Hantigiri Narzary
A month-long free summer information technology (IT) empowerment for girls started from today at Nedan foundation conference hall in Kokrajhar. It was organized by Nedan foundation, an NGO based at...