A Union home ministry team is visiting the state to probe the allegations of Bangladeshi encroachment on a huge plot of land measuring around 7000 bighas which belong to 25 monasteries in the state. The high level team has already visited the Bardowa satra as part of its investigation.

According to information, the satra bodies have alleged, an area measuring more than 6000 bighas have been the living land of these immigrants. All Assam Satra Mahasabha, along with All Assam Students Union, Asom Jatiyatabadi Yuva Chatra Parishad have been categorically demanding steps to check these encroachment but nothing has come out. The Union home ministry has sent a high level team to probe it. The team visited Bordowa satra on Saturday after it arrived in the state. It may be noted that the state has as many as 900 satras and the Bnagldeshi encroachments have been posing a serious threat for these 25 site of vaishnavite culture.

20 Apr 2012 - 1:11am | editor
ASHA (Accredited Social Health Activist) a trained female community health activist selected for every village with a population of 1000 is one of the key strategies under the National Rural... 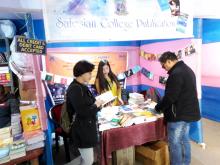 17 Mar 2019 - 10:06am | CM Paul
Darjeeling: The Salesian College Publication participating in the 23rd Annual Darjeeling District Book Fair held from 14 to 17 March 2019 won laurels for being the only college publication at the...

6 Jun 2012 - 12:20am | Swapnil Khound
With a large number of citizens from the North-East come to Delhi-NCR for education and jobs. The rising unpleasant incident of racial discrimination and verbal abuse against citizens makes...