Very recently Bangladesh Rifles Director General did the same while he was holding a meeting with the Indian counterpart albeit what he revealed I enough to leant that the most wanted terrorist is very much there. The BDR Director general Sakil Ahmed told reporters that Paresh Baruah is “no longer” on the soil of Bangladesh these days.

Bokul is known to an expert in bomb and IED joined the rebel groups in March 1998 and was undergoing a hardcore training at ATTF camp at Khagrachari, Bangladesh. He was the physical trainer in the ULFA camp in Bakakura PS- Jinaighati, district Sherpur Bangladesh before he surrendered on Saturday with one point 9mm pistol, 11 round ammunition and one hand grenade. 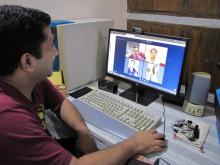