Assam mobile theatre pioneer Adya Sarma passes away on Sunday. He was 75. The end came at 12 noon at a local nursing home in Nalbari where he was admitted a few days back. As soon as the news of Sarma’s demise spread like wild fire, thousands of people thronged his house and paid him their last respect.  A pall of gloom has descended following the death of Sarma , who was known for his relentless efforts and skill for mobile theatre.

“We are left orphan. We have no one around us,” said Rinu Das who is involved in mobile theatre. A visibly disappointed Ritul Lahkar told Assam Times that Sarma’s death is a huge loss for the state’s cultural field where he where he gave mobile theatre. 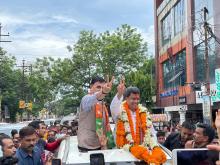 Respectful adieu to ‘Guruji’
Sahanur to be produced in court
Truckers attacked, money looted
No Cong MLAs to join BJP!