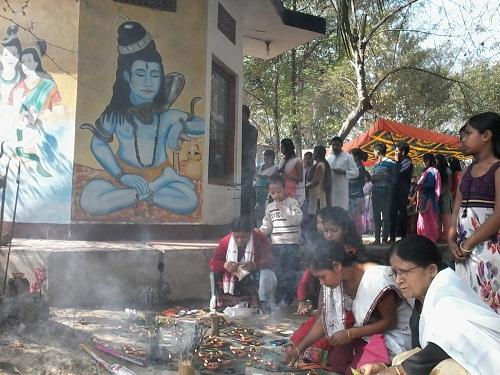 Golaghat wears a festive look as Shivrati celebration is going on in full swing.

Devotees in large numbers are thronging the Shiva temples to offer pujas to the Lord from early in the morning.

Historic Negheriting temple of the Lord Shiva is teeming with thousands of devotees who have been waiting in long queues patiently to offer pujas to the Lord Shiva.

“I arrived here at 9 in the morning. But it will need four hours more for me to offer puja to the Lord Shiva,” said Rupkanta Bora, a devotee who came from Ghiladhari area to Assam Times.

Speaking to Assam Times organizers said,” we are trying our level best to ensure smooth celebration of the annual festival.”

The puja which began on Monday will end only on Wednesday.

31 Dec 2009 - 3:30pm | editor
The fifth North Eastern Business Summit to woo investment from outside, organised by the Ministry of Development of North Eastern Region would be held in Kolkata on January 8 and 9. According to...

9 Jul 2007 - 4:23am | editor
Delhi: Caught in the controversy, the Uttar Pradesh police on Sunday collected the blood sample of PC Ram’s brother for DNA matching even as the family members of the kidnapped FCI official in...

US to study NE climate change

26 Feb 2012 - 3:25am | editor
The United States of America is interested to do research on the renewable energy sources in the north eastern region. Disclosing this n Saturday, US envoy to India Peter Burleigh said that the...