Journalists and conscious citizens of Assam on Monday once again defied militants’ diktat and celebrated the 66th Republic Day at Guwahati Press Club. Hoisting the national flag, senior journalist Pramod Kalita called upon one and all to pay respect to the Tricolour, which symbolizes the spirit of freedom and also the sacrifices of numerous freedom fighters.

Kalita pointed out that India, unlike many of its neighbours, has maintained the spirit of democracy since the days of Independence. He however cautioned that every Indian must be cautious against anti-national elements and also some veiled entities pretending to be progressive, secular and patriotic.

Earlier, senior journalists Rupam Barua and Ranen Kumar Goswami described how a section of journalists took the challenge to defy the diktat of separatist militants in 1998 and hoisted the national flag in the press club and continued the spirit to observe both the Republic and Independence Days.

Over the years, it has become almost a reflex action for various banned militant outfits of Assam, Manipur and north Bengal to call for boycott of the R-Day programme, protesting against the ‘colonial Indian government’ allegedly exploiting the resources of the region. This year too was no different, and people responded to the boycott call with near total indifference.

15 Feb 2011 - 8:00pm | editor
Centre is very positive on the on going peace process with ULFA. Chairman of the outfit Arabinda Rajkhowa told media after arriving in Guwahati from Delhi on Tuesday. Rajkhowa said the process would... 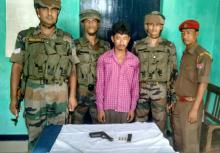 3 Jun 2015 - 8:21pm | AT News
Yet another student leader is all prepared to join BJP. He is none other than Manoj Kumar Baruah. The AJYCP chief is scheduled to quit the organization at an emergency meeting in Guwahati on...