The Kokrajhar district administration ceremonially distributed the Rehabilitation Grant and Financial Assistance to the family victim of the carnage on December 23 last in Kokrajhar district, which was announced by the Union Government at a meeting held at DC office conference hall today in Kokrajhar.

Each of the deceased family members of 33,who were killed was given away Rs.3 lakh as ex-gratia from union government in the presence of public leaders.

Deputy Commissioner, Kokrajhar Thaneswar Malakar said the final ex- gratia which was announced by the union government were distributed among victim families and 1,792 families each of be provided Rs 50,000 for rehabilitation grant,whose houses were totally burned and injured persons would be given grants-in-aid as per announcement. 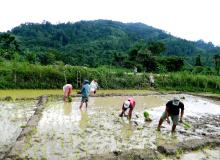 Say no to terrorism in Kokrajhar

23 Dec 2014 - 9:49pm | Hantigiri Narzary
At least 10 persons were killed and other eight have sustained injury when NDFB-S militants unleashed a reign of terror in Kokrajhar district on Tuesday a day after a powerful grenade exploded which...