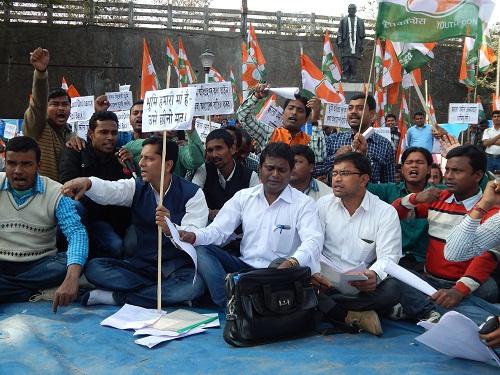 The activists with banner,festoone and placards shouted slogans BJP govt hai hai,stop new land acquisition ordinance and held good governance across the country which was started from 10 Am to 1 PM.The satyagraha submited a memorandum to President of India through Kokrajhar DC in protest against anti-farmer ammendments in Land acquisition ordinance 2014.

Sambhu Mandal,president of Kokrajhar Lok Sabha Youth Congress committee particiapting the satyagraha said that the BJP led NDA government has been taking anti-farmer stand since after assumed power at the centre there seems a deliberate attemst to harm agriculture industry,especially the small farmers and agriculture based workers. He said that farmer are not getting fair price for their production,the benefits of drop in diesel prices are not reaching to the domestic consumers most affected by which are small farmers again and there is a shortage of fertilizers,urea and seed varieties.He has alleged that BJP led NDA government is trying to snatch farmers’ and tribals’ land on the name of land reforms across the country.

4 Mar 2018 - 6:15pm | AT News
Kokrajhar: Kokrajhar is gearing up to host an international trade fair. Courtesy Bodo Writers Academy, an organisation of Bodo writers where the leaders are preparing to hold the event from March 10...