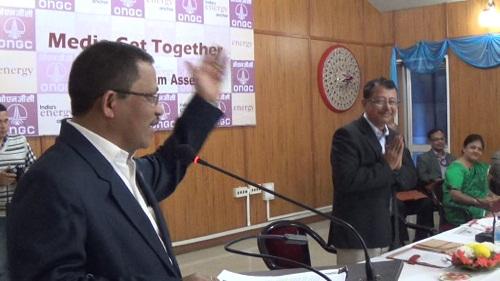 Outgoing Assam Asset ONGC Executive Director, Bimal Kumar Barua Tuesday hosted some 200 media persons at the Officer's Club at Nazira to brief the achievements of Assam Asset during his tenure. Barua is due to retire from his post on January 31, 2015.

Speaking to the convention he said that nearly 90 percent works of the Assam Renewal Project is being completed and a proposal of 1,768 Crore, Gelekey Renewal Project has been tabled which the Petroleum Ministry is to finalize in a few days. Presently, Assam Asset has 19 drilling rigs being looked after by ONGC.

He also informed that ONGC has submitted a proposal to the Government of Assam for the proper use of 1, 20, 000 MMCM of Natural Gas from their oil field for Thermal Power and the Gas Cracker at Lepetkota.

In this meeting he also reveals that the land settlement for the Cancer Hospital at Sivasagar is completed and hope that the major barrier for the construction of this multi crore project is removed.

18 Mar 2016 - 9:03pm | Gwshad Basumatary
The bust of the ‘Father of Bodos’, Bodofa Upendra Nath Brahma was unveiled at the premises of Kokrajhar Science College by the General Secretary of ABSU, Lawrence Islary on Friday. Speaking on the...

30 Aug 2014 - 8:11pm | AT News
Chief Minister Tarun Gogoi on Saturday dared AGP and BJP to come out with evidence to substantiate the allegations of his role chit-fund scam.In a statement issued in Guwahati, Gogoi said that...