4 May 2016 - 9:51pm | AT Kokrajhar Bureau
A  cadre of NDFB(Songbijit faction) was apprehended by security forces beloinging to police and army from Gossaigaon Tinali yesterday night in a joint search operation in Kokrajhar district.He... 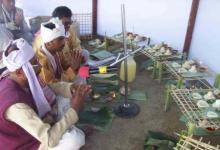 Joy and solemnity of Me-Dam-Me-Phi

31 Jan 2017 - 9:08am | AT News
The Ahom community in Assam is observing Me-Dam-Me-Phi on Wednesday across they remembering their forefathers with traditional religious fervour. Various organizations are holding puja in the public...