An NDFB cadre was killed during an encounter with police in Diphu early this morning. According to information, a few NDFB cadres were coming for extortion while police also were waiting near D S College. The exchange of firing continued for nearly half and hour which left the Bodo rebel cadre dead and two or three others have managed to flee from the spot. Late police recovered two hand grenades and a revolver from his possession. Investigation is going on.

Beeline for ticket in BPF office

25 Jan 2015 - 4:30pm | Hantigiri Narzary
Aspirant candidates from ruling BPF party for BTC election slated to beld held on last week of March next were saw beeline to the party head office along the JD Road to get party ticket and submitted...

7 Jan 2015 - 8:55pm | Abdul Gani
The 19th National Youth Festival 2015 starts from Thursday at Nehru Stadium in Guwahati. The union ministry of sports and youth affairs in collaboration with the Assam directorate of... 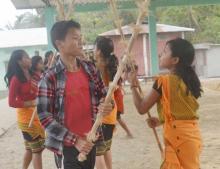