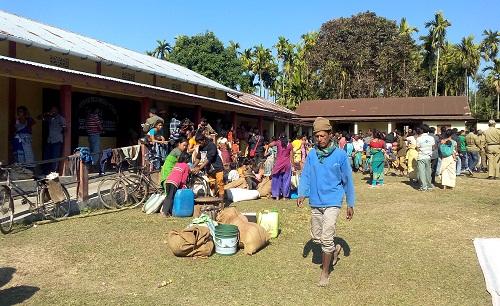 Normal train service remains disrupted in Assam on Thursday when Adivasi people blocked the rail tacks in protest against the NDFB-S massacre in Kokrajhar and Sonitpur where around 70 people lost their lives.

Led Adivasi National Convention Committee, Adivasi people in large number came out of their homes in the various places across the state in the morning and blocked the rail tracks to prevent the trains from moving for several hours.

Reports of rail blockade are pouring in from several parts of the state. In Tinsukia, Dibrugarh, Jorhat, Sivasagar and Golaghat   districts, several trains are not moving under impact of the indefinite blockade.

Apart from it, the Assam Tea Tribes Students’ Association is giving a 12 hour Assam bandh call on Friday protest against the carnage of the Adivasi people by NDFB-S in three districts. The bandh would start from 6 in the morning to end at 6 in the evening.

15 Feb 2014 - 9:48pm | AT News
At least 250 IITians had a narrow escape when the ferry carrying them struck on the river Brahmaputra on Saturday.According to reports, the ferry which brought them back to North Guwahati from a...

2 Jul 2010 - 12:13pm | editor
Noted critic and prominent citizen Dr Hiren Gohain has sent a letter to chief minister Tarun Gogoi on the progress in terms of holding talks with Ulfa. According to reliable sources, Dr Gohain,who...