The fair price shop dealers in the BTAD areas are worried over the suspension of sugar supply across the state. They further have expressed concern over lack of facilities for the fair shop owners. These issues came up for discussion when they held their two days annual convention in Kokrajhar which concluded on Sunday.

The All India Fair Price Shop Dealers’ Federation general secretary Biswambar Basu attended the open session at the Balajan Tinali Gaurang High School ground on Sunday. Basu said that the dealers have not been receiving proper facilities for implementing the government schemes. “The suspension of sugar distribution is unfortunate. The common people have been bearing the brunt,” said Basu.

Shoot out in Margherita

16 Dec 2017 - 1:07pm | Mithun Baruah
MARGHERITA: Suspected ULFA-I rebels are believed to have been holding a heavy gunbattle with security forces a day after they kidnapped a local BJP leader's son on Friday. Local residents told Assam... 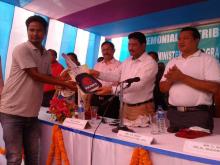