BJP and Congress traded charges and counter charges in the Assam Assembly over the move to stop ration in the tea gardens.
Speaker Pranab Gogoi feared bad days of law and situation if the ration is stopped in the tea gardens. He further asked the BJP legislators to take up the issue with the Centre.

Amid the din over the issue in the zero hour, Gogoi told BJP MLAs, ”instead of shouting here, please convey to your leadership in Delhi that if it is not resolved, bad days are coming." 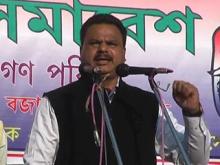