26 Aug 2012 - 1:44pm | editor
Karnataka deputy chief minister R Ashokaon Saturday met Assam Chief Minister Tarun Gogoi and briefed him about the steps taken by his government.Ashoka, who is leading a good will team to north east... 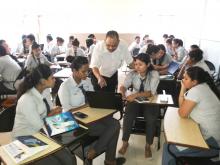 13 May 2015 - 11:09am | CM Paul
A Social work institution in northeast India has come up with a novel workshop program to equip their outgoing students fit for job placement. The final year Master of Social Work students after the...