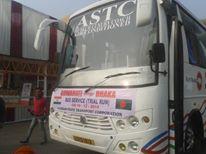 After years of will-it-won’t-it, Guwahati resumed the bus service to Dhaka on Wednesday. PWD minister Ajanta Neog flagged off the bus on trial run to the neighbouring country at a brief function in Guwahati in the morning. The bus started the much-awaited journey via Shillong and Dawki border point in Meghalaya.

The ASTC-owned deluxe air-conditioned bus left the capital city carrying a joint delegation of India and Bangladesh for a technical survey of the route for starting a regular bus service between Guwahati and Dhaka.

In her speech, Neog said that that India-Bangladesh road connectivity will get a fresh lease of life to boost the trans border trade and commerce. Bangladesh Joint Secretary  of home affairs, Bangladesh Sheikh Abdul Ahad who was present in the function said that the service would give the people of both the countries a new avenue.

16 Jan 2016 - 10:18pm | Hantigiri Narzary
At a time  when preparations are afoot to be unified  in between BPF  and BPPF on Sunday at Dotma Tulungapuri in Kokrajhar, the BJP and AIUDF parties have termed that the unification...

10 Oct 2014 - 9:53pm | Hantigiri Narzary
Security forces recovered a huge cache of arms and ammunition after a heavy exchange of firing with NDFB-S militants in Gossaigaon on Friday.The encounter took place in the wee hours at Dumbazaar...

21 Sep 2014 - 9:39am | AT News
DIBYA J BORTHAKUR, RAHA: A truck driver lost his life in Raha when a huge tree fell on his vehicle on the way to Nagaon from Guwahati ion Monday.The incident took place near Jongal Balahu Garh on the...