The Central Bureau of Investigation, probing the Saradha scam questioned Congress MLA Anjan at its Kolkata on Monday. Sources told Assam Times that Dutta was questioned on his business deal with Sudipta Sen which came under the scanner as he used to publish material for Saradha group.

The Amguri MLA arrived in the CBI’s office at CGO Complex in Salt Lake at 1 in the afternoon to be interrogated. CBI summoned Dutta and Dr Himanta Biswa Sarma to Kolkata to be quizzed in this connection in between Monday to Wednesday three months after his residence was raided.

19 Nov 2014 - 10:21pm | AT News
There is no respite for Sadananda Gogoi. A special court on Wednesday refused to grant bail for the singer whom CBI arrested in connection with the Saradha scam.After accepting CBI’s prayer, the... 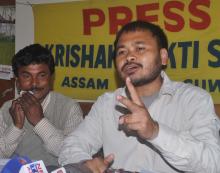 24 Feb 2014 - 2:23pm | AT News
KMSS president Akhil Gogoi blamed it all on the Government for the injury of Pramode Boro who attempted self immolation in Dispur opposing the land patta distribution on Monday.Talking to reporters...