Focus on disaster and development

The seminar focused on Natural and Industrial Disasters aiming to create awareness among industry leaders, entrepreneurs, CSOs, NGOs, bringing all the stake holders like the Assam State Disaster Management Authority (ASDMA), Fire and Emergency Services, Government of Assam, National Disaster Response Force (NDRF), International NGO Doctors For You (DFY) and the Directorate of Geology and Mining, Government of Assam.

“Guwahati was an unplanned city since the capital of Assam was shifted from Shillong to Dispur during 1970, following a very short notice. A major chunk of population was shifted and settled and haphazardly administrative buildings were raised, houses built without planning as a result of which Guwahati today is inundated with flash flood time and again. It is a major crisis of Guwahati and the Government machinery is aware of it. Long term and permanent steps to mitigate this challenge is being taken,” said Captain Robin Bordoloi, Chairman, Guwahati Metropolitan Development Authority (GMDA).

He outlined the initiatives taken by GMDA in mitigating both natural and manmade disasters and in reply to a question said that Disaster Management initiatives need to be taken along side development.

Nandita Hazarika, Deputy Secretary and State Project Coordinator Revenue and Disaster Management Department, Government of Assam participating in the seminar said that most disasters across Assam can be averted by researched based studies, general awareness, integrating all the stakeholders, proper scientific planning, data and information sharing and most importantly with civic sense and acting more responsibly. She made an elaborate presentation on the issues and measures taken by ASDMA since its inception in 2010.

S K Mishra, Head of the Chemical Division of OIL India Limited spoke about industrial disasters and its impact on the society and environment. He presented ways and measures that need to be taken by establishments to avert industrial disasters. “Assam predominantly has been a rich state in terms of natural and mineral resources and it is importantly that we manage it without loss,” he added.  Presentations were also made by Surendra Kumar, Assistant Commandant, National Disaster Response Force (NDRF), Guwahati, Hemanta Bhattacharjee, Deputy Director, Fire and Emergency Services, Government of Assam and Mridul Deka, Program Manager, Doctors For You. Anusuya Barua, Assistant, Geologist, Directorate of Geology and Mining, Government of Assam also made her observations during the seminar. 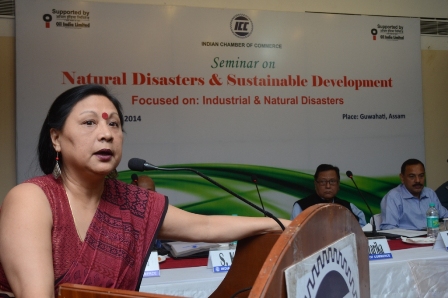 How NRC objections drastically went up in 3 days

2 Jan 2019 - 2:08pm | AT News
AASU along with many other organizations have submitted over 2.5 lakh objections before the NRC authorities in different parts of the state from Saturday to Monday. According to sources, these...