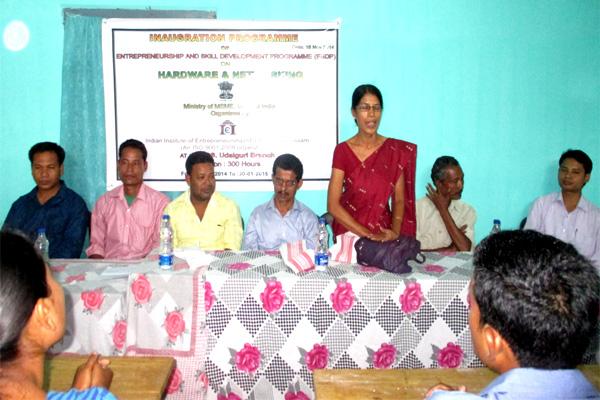 The students must get ready now on wards to accept the challenges ahead in the world of competitions. Everywhere there is competition to reach the target and now it is quite easy for our new generation to acquire knowledge through computer and networking. This was said by Rewati Raman Sapkota, a senior media person of Udalguri district while inaugurating the 300 hour long workshop cum training on computer hardware networking organized by the NRDS, an NGO of Udalguri under the aegis of Indian Institute of Entrepreneurship (IIE) under the Ministry of MSME, Government of India here at Udalguri town today. He also advised the students community to take the maximum advantages of such trainings held under the aegis of union government for better scope in the near future.The opening ceremony chaired by Naren Deka, a social worker of Udalguri district witnessed the eagerness of students hailing from different parts of the district to pursue the training provided by the IIE on computer hardware and networking for the first time in Udalguri district. The meeting to this effect was also addressed by Usha Das, vice chairman of Udalguri town committee and Ratna Rabha, managing director of NRDS on the occasion.

2 Oct 2012 - 3:50am | editor
Tension is simmering along Assam-Mizoram interstate border when a Barak Valley-based NGOs launched a fresh indefinite blockade on NH-54.The blockade on the road connecting Mizoram was launched at 6...