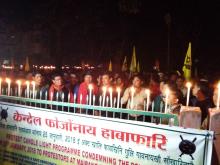 9 Aug 2012 - 6:44pm | editor
Causing major inconvenience to over 1,000 people, the Kolongpar passenger train stranded for over two hours after the train developed technical snag in Morigaon district on Thursday. The passenger...