Dhola limping back to normalcy

12 Jan 2018 - 7:35am | AT News
MONGOLDOI: Life in the trouble torn Dhola is limping back to normal two days after the semi urban area in Darrang district was put under curfew to defuse tension after two people were killed in... 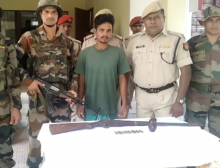 19 Jan 2011 - 1:59am | Anup Biswas
The 36 hours Dima Raji Bandh starting from 5 AM today paralyzed the normal life here at Haflong. The bandh was called by Joint Action Committee Dima Raji Movement (JACDM) in protest against the...