Sivasagar police have arrested nine people on Wednesday in a day after they inflicted torture on a woman branding her a witch. Police officials told Assam Times that they picked up the villagers, including seven women from Gorbhanga area hours after they singled out the elderly woman and torture her whom they rescued before being rushed to a local hospital. The villagers were arrested on the basis of the FIR filed before police by her family members. 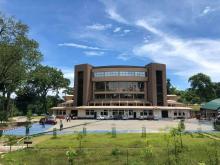 2 Aug 2015 - 6:58pm | AT News
More than 200 people had a narrow escape when two planes carrying them avoided a runway collision in Guwahati on Sunday.The bizarre incident was averted in the afternoon at the Lokpriya Gopinath...

11 Sep 2015 - 8:19pm | Suryya Kumar Chetia
Assam Women’s University(AWU)  which is located at Rowriah, Jorhat celebrated its first foundation day on 11th September, 2015. The University which began its journey on the 11th of September...