1 Oct 2015 - 9:20pm | Siddhartha Handique
Police claimed to have caught a dreaded Maoist leader who has been trying to expand the base for the last couple of years.  Identified as Aditya Bora he was arrested by Golaghat police on... 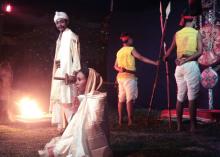 13 Nov 2008 - 12:15am | DigantaTalukdar
Silpa Kanan, a cultural organisation of Nagaon organised a drama "Jerengar Sati" on Tuesday Evening. This historical play was enjoyed by a large number of audiences.

5 Apr 2017 - 11:16pm | Shajid Khan
In a bid to spread the importance of sanitation and cleanliness among the masses and targeting to achieve PM Modi's vision of ‘Clean India’ by October 2, 2019, the 150th birth anniversary of...