Golaghat police held 7 persons after ICICI Bank charged them what siphoning Rs 2.1 crore by mortgaging fake gold ornaments. Six other men involved in it are absconding.

The bank authorities accused Diganta Saikia and valuer Rupak Roy Chowdhury as the mastermind behind the fraudulent withdrawal of the amount.
..................... 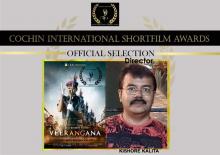 11 Feb 2021 - 2:12pm | AT News
In a heartening news, the Assamese documentary film on the country’s first female commando unit ­– ‘Veerangana’, was adjudged the Best Documentary at the Cochin International Short Film Awards, 2021...