Leading parties and organizations in Kokrajhar have vehemently opposed Ranjan Daimary’s arrest in the run up to the tripartite peace talks.

They demanded immediate and unconditional release of Daimary before holding peace talks with the outfit. They further urged NDFB(Songbijit faction) to come forward for peace negotiation.

28 Jun 2016 - 4:01pm | Shajid Khan
In a joint operation of Army and police arrested one Dipak Basumatari (33) at Goreswar of Baksa district on Monday at about 4.45 pm. The youth is a resident of Chinakuna village. A 9 mm pistol with...

30 Apr 2014 - 8:17am | Dharmistha Goswami
Rongali Bihu was celebrated at Outram Lines, Delhi on April 13. The event was organised by Sristi, an Assamese youngsters' organisation. 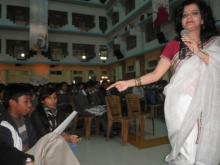